But when it happens, it tends to be relatively accurate. It is therefore useful to know at least how this pattern looks like and how to take advantage of it thanks to some simple tips.

What is the abandoned baby?

The abandoned baby pattern mostly happens when a major event in the market like earnings or management changes. In this case, traders will rush to buy the asset, which will lead to a gap up. As the news fade, the asset will then start moving in the opposite direction. The chart below shows a bullish example of this pattern. 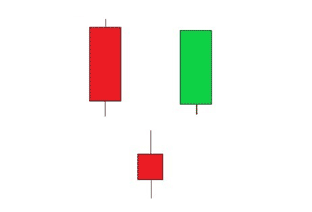 In other situations, the abandoned baby can happen in a combination of candlesticks. For example, as shown below, the AYX stock made a major bearish breakout in August 2020. It then remained in this range for a few days and then it made a gap-up in September. This pattern can also be said to be an island reversal pattern.

This kind of pattern can happen in both a bullish and bearish trend. When it happens during a bullish trend, it tends to result to a new bearish trend. This is known as a bearish abandoned baby.

On the other hand, if it happens during a bearish trend, it results to a new bullish trend. The chart below shows an example of the pattern on the Palantir stock.

Conditions for an abandoned baby

As we have noted when looking at other candlestick patterns, there are conditions that need to be met when they form. The same applies to an abandoned baby. The following conditions need to apply when it happens:

Events that cause an abandoned baby

In most cases, this pattern happens after a major market event. Some of the top events that cause the abandoned baby candle are:

Tips for trading the abandoned baby

There are several tips that you should always have in mind when trading this candlestick pattern. These are:

Pros and cons of this candlestick pattern

On the other hand, the main con is that it is not a popular pattern. This in itself is not really a con, but it does make it more complicated to learn about it.

The abandoned baby is a reversal pattern that happens mostly after a major event. While it is a rare pattern, it is a relatively accurate pattern that you can use.