Candlesticks are the most common chart patterns used in the financial market. Unlike line charts and bar charts, they give more information about the open, high, low, and close prices of an asset.

Professional traders use the candlestick patterns to predict whether the price will continue moving in a certain direction or whether a reversal will happen.

In the past, we have looked at several of these patterns, including evening and morning star,  the hammer. and the gravestone Doji, which is one of the three popular Doji patterns.

In this article, we will look at the dragonfly doji, which is another popular type of the pattern.

What is a dragonfly doji pattern?

A dragonfly doji candlestick pattern is formed when a candlestick has the same high, open, and closing prices. The candle can be on all timeframes, including on a daily, hourly, and 30-minute chart.

As shown below, the dragonfly doji has a similar appearance to the hammer pattern or capital letter T.

The dragonfly doji happens like this: an asset price opens and then sharply drops. Before closing, the price moves back up and closes at the point where it opened. 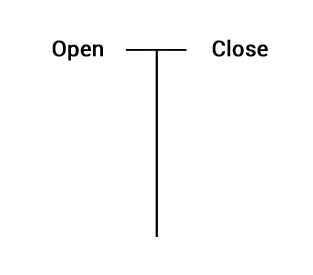 When this pattern can happen?

This doji pattern can happen inside a range or after a strong downward trend. If it happens when the asset price is ranging, it is usually a signal that the price will remain within the current range.

However, if it happens after a strong downward trend, it may be a signal that bears are tiring and that buyers are coming back.

In most cases, the length of the lower shadow is used as an indication of the strength of an upcoming reversal pattern.

Examples of a dragonfly doji

A good example of a dragonfly doji pattern is shown in the four-hour EUR/USD pair shown below. As you can see the price was in a minor downtrend when the price opened sharply lower and then ended the day close to where it opened.

That pattern was there followed by a strong upward trend that pushed the price at 1.1830.

On the second example, we see the USD/ZAR pair in also a minor downward trend. The pair had fallen for three consecutive candles. The fourth one opened slightly below where the third one closed, fell sharply, and then closed near where it opened. The pair then made a minor bounce.

The dragonfly doji, like all the other candlestick patterns, should not be used in isolation. The best approach of using it is to combine it with other technical and price action strategies. For example, you can use indicators like the Average True Range (ATR) and double moving averages.

Most importantly, you should combine it with other volume-based indicators like the money flow index and the accumulation and distribution indicator. The benefit of using such volume indicators is that they will help you know whether the price action is supported by strong volume.

As mentioned above, the hammer and the dragonfly doji pattern are extremely similar. Indeed, the two usually send the same signals.

The main difference between the two is that the doji opens and closes at the same place. A hammer, on the other hand, opens lower and closes slightly below the opening price.

In most cases, a dragonfly doji is usually viewed as a more accurate sign of a reversal.

Dojis are popular reversal candlestick patterns in the financial market. They are formed when the price opens and closes at the same level in a sign of consolidation. The dragonfly is an important reversal pattern that you should consider using in your day trading.

DTTW™ is proud to be the lead sponsor of TraderTV.LIVE™, the fastest-growing day trading channel on YouTube. With over 100k subscribers in less than 6 months, TraderTV.LIVE™ features a daily live trading broadcast, professional education and an active community.