Full Guide to Use Head and Shoulders Pattern in Day Trading

Price action is an important concept in trading. It is a method of trading where participants focus mostly on how an asset is trading. They ignore other concepts like technical indicators and fundamental analysis.

In this report, we will focus on the head and shoulders pattern, which is a very common price action strategy used by traders. And maybe one of the best way to identify a reversal in charts.

What is the Head and Shoulders Pattern?

This is a pattern that traders use to find reverse and reversal. The pattern happens when the price of an asset is in an uptrend. When it completes, the pattern is usually the begin of a new downward trend.

The pattern is formed when there are three peaks during an uptrend. The middle of the three peaks is usually taller than the two others.

As a result, it paints an image of how a person looks like. The head of a person is usually at a higher level than the shoulders. A good example of how this forms is shown on the chart below. 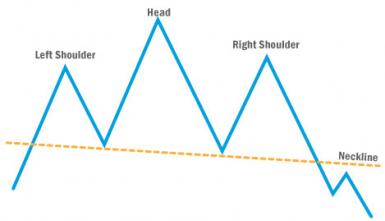 The head and shoulders pattern is part of what are known as reversal patterns. The others are a double or triple top, hammer, bullish and bearish engulfing, doji, and a rising and falling wedge pattern.

Is this tool bullish or bearish?

The head and shoulders pattern is usually a bearish sign. This means that when it happens, it usually sends a signal that the price’s bullish move will soon turn bearish.

On the other hand, when the head and shoulders happens after a bearish trend, it sends a signal that bears are losing momentum. This typically leads to a new bullish trend.

The head and shoulders pattern form in a very simple way. This is summarized in the image above. Here are the important parts of this pattern:

Important note: In this pattern, the price must move below the neckline to complete

There are a few steps you need to take when using the head and shoulders pattern.

After this, you should wait and see whether it moves below this line or not. If it moves back, you should also wait to see where it reaches. Finally, any move below the neckline should be indicative of further drops.

You can draw these lines using the tools that are provided. The TradingView platform provides a head and shoulders tool.

A good example of this is shown on the silver chart that is shown below.

Head and Shoulders in Silver Chart

Like other chart patterns, it is possible to use the head and shoulders to trade stocks. A good example of this is in the Peloton stock that is shown below. As you can see, the stock rose to $140 and then pulled back to $93.

It then rose to $170, forming the head section. The stock then rose to $125 and then formed the right shoulder. Therefore, in the longer term, there is a possibility that the stock will break out lower.

A good example of the inverse or inverted head and shoulders pattern is in the chart below. The chart shows that the Bitcoin price declined to $30,000, which became the head. It also formed two shoulders. Therefore, while the bullish breakout has not happened yet, there is a possibility that the cryptocurrency will break out higher.

The head and shoulders pattern is a common one among chartists. It is easy to work with, and is ideal for identifying reversals.

As a trader, we recommend that you take your time to learn more about it. Also, learn about how you can use volumes to confirm it and whether you can use any indicators to confirm the trends.