What Can Traders Get from Hedge Fund Manager Bill Ackman?

Day Trade The World™ » Trading Blog » What Can Traders Get from Hedge Fund Manager Bill Ackman? 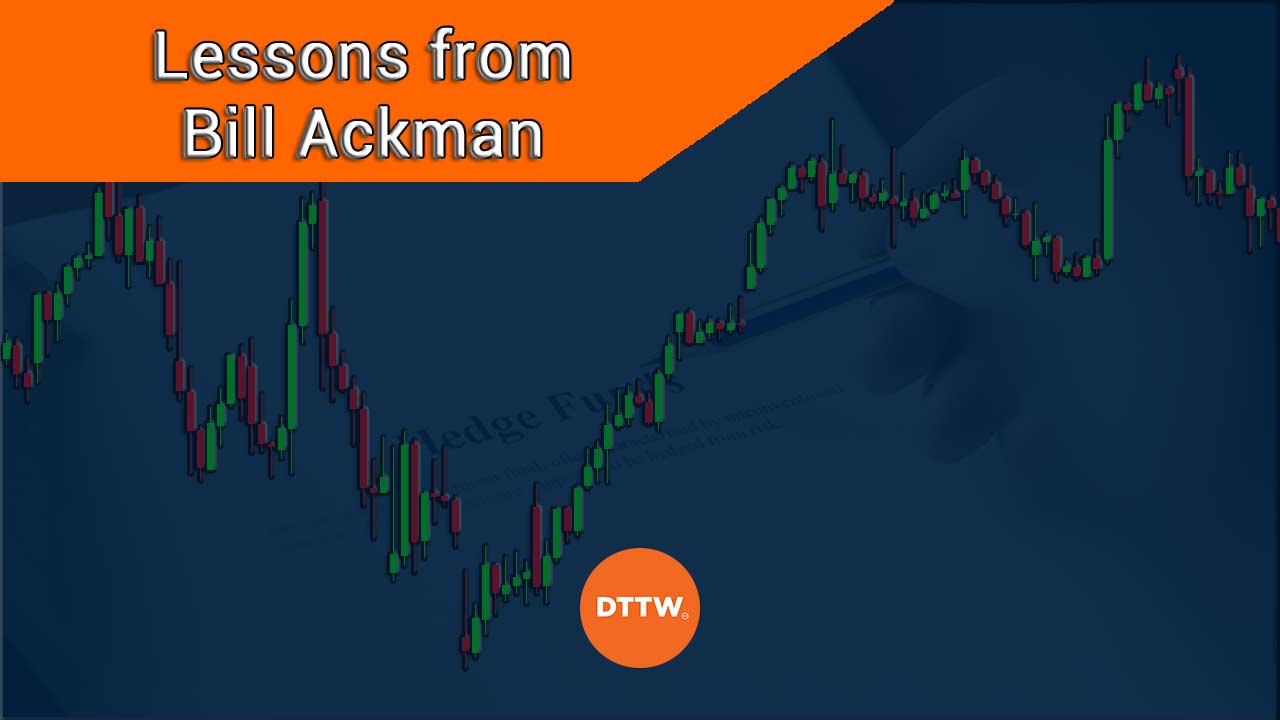 For many years, Bill Ackman has been the most successful hedge fund manager. He has been the ‘unofficial’ poster-boy of activist fund managers. In 2015, he appeared on the cover of Forbes magazine.

The article, love him or hate him, Bill Ackman runs the largest hedge fund received thousands of reviews and comments. It proclaimed Ackman as the next Warren Buffet. In 2014, his fund had just returned a massive 40% net of fees.

However, in the past three years, Ackman has been one of the best-performing hedge fund manager. For example, in 2020 as the Covid pandemic was starting, he turned $27 million into $2 billion within less than 2 months.

Here are the top lessons for traders and fellow investors from one of the best hedge fund manager.

But, first, a demonstration of how even the best investors can fail.

Bill Ackman has made many investments in his career. But two of them almost brought him down. First, he went short Herbalife, a company that manufactures nutritional products and uses a multi-level marketing strategy.

He went short the company and started a campaign to bring its stock price down. It did not happen as Carl Icahn took the opposite trade. Bill Ackman lost more than $1 billion.

Second, Ackman invested in Valeant Pharmaceuticals. He bought the stock at around $145 and then saw it climb to $250. However, the conditions changed and the stock declined sharply. He exited when the stock fell to about $10 and lost $4.4 billion.

Now, as promised, let's go and see what we can learn.

What can we learn from Bill Ackman?

One of the best performing trades by Ackman was a short call for a company called MBA that insures municipal bonds. After placing the short trade, his trade was in the negative for more than 7 years before the company’s shares fell from $70 to $1. He earned more than $1 billion from the investment.

Many investors shorted Herbalife after Bill announced his investment based on his historical success. Unfortunately, the FTC announced that though Herbalife had some problems, they didn’t amount to the pyramid scheme Ackman claimed they were. The shares climbed on the upward trajectory and Ackman will have to liquidate after spending more than $50 million battling the company.

As a trader, this is a major lesson you should learn. Not all trades will go your way, and you need to deal with your losses.

Today, your bullish bet on Brent oil could make you good money while tomorrow, the same bet will cost you a fortune. Always position your trades knowing that they might go wrong (but without being too scared).

Another thing you should learn from Ackman’s troubles is on the need to walk out when your investment thesis doesn’t seem to work out.

The best company to illustrate this is Valeant Pharmaceuticals (VRX). For many years, Valeant was the darling of investors. They flooded the company raising the shares from less than $30 in 2011 to a high of $257.

In 2015, the company problem’s started when Hillary Clinton talked about regulating the pharmaceutical industry. VRX was notorious for hiking drug prices. This wad coupled with the fact the company had borrowed massively to buy drug companies.

When these problems started, Ackman had an opportunity to exit but he didn’t. He assumed that there would be a recovery. At $70, he bought more shares and put in place forward contracts assuming that the price for VRX would rise to $160. Forbes now estimates that Ackman has lost more than $1 billion (in personal cash) from the investment as a hedge fund manager.

As a day trader, you have to balance wanting to hold an asset longer than you should with wanting to exit too early and not maximize your profits. No, it's not easy!

» Related: Learn When to Enter and Exit

Another important lesson you should learn from Ackman is on the need for being frugal even when you have the best year/month. In his best year, Ackman was always in the news. He broke the internet when he bought a condo for $90 million.

In the same year, he listed his hedge fund in Amsterdam raising $5 billion. His family foundation gave millions to select organizations. He gave speeches to several organizations.

As a trader, you might be tempted to show other people you are successful. This is wrong because during your down year, the same people will laugh at you. So.. don't be too overconfident!

In an old interview with Bloomberg and in his quarterly letter to investors, Ackman was quick to point out his mistakes. At one point, an interviewer asked him whether he regretted anything in his investment.

The ‘right’ answer at the moment could be that he did not regret anything. He did the opposite and accepted the mistake. Perhaps, this is the reason why only a few investors have redeemed their funds with him.

The fact is that in investment and day trading not all your thesis will go right. At times, you will make mistakes. Accept the mistakes, correct them, and learn from them.

»Related: Mistakes to avodi as a trader

Ackman is still one of the best hedge fund managers in the world. Yes, he has made some significant losses in a period when the market is hitting new highs on a daily basis. The same will happen to you at times. You should not panic. Instead you should let these experiences make you a better trader.

Another important lesson that you can learn from Bill Ackman is on not giving up. After losing money for three straight years, the easiest thing that he could have done was to give up and close his fund.

But he did not. He decided to maintain his hedge fund and he was rewarded as he recouped all his losses. He also went ahead and launched the biggest SPAC in history when he raised $4.4 billion from investors. Most importantly, he listed a tracking stock for his fund in London, where it is now part of the FTSE 100 index.

#6 Be ready to change your style

Meanwhile, at times, you should not be too rigid about your investing or trading style. If it is not working, change it. In the past few years, we have seen Bill Ackman change his investment style.

For a long time, Ackman was known for his aggressive activist investing style. But as he emerged from his downfall, he changed his method.

Today, he does not seek activist investments. Instead, he mostly invests in undervalued friendly companies like Chipotle and Lowe’s.