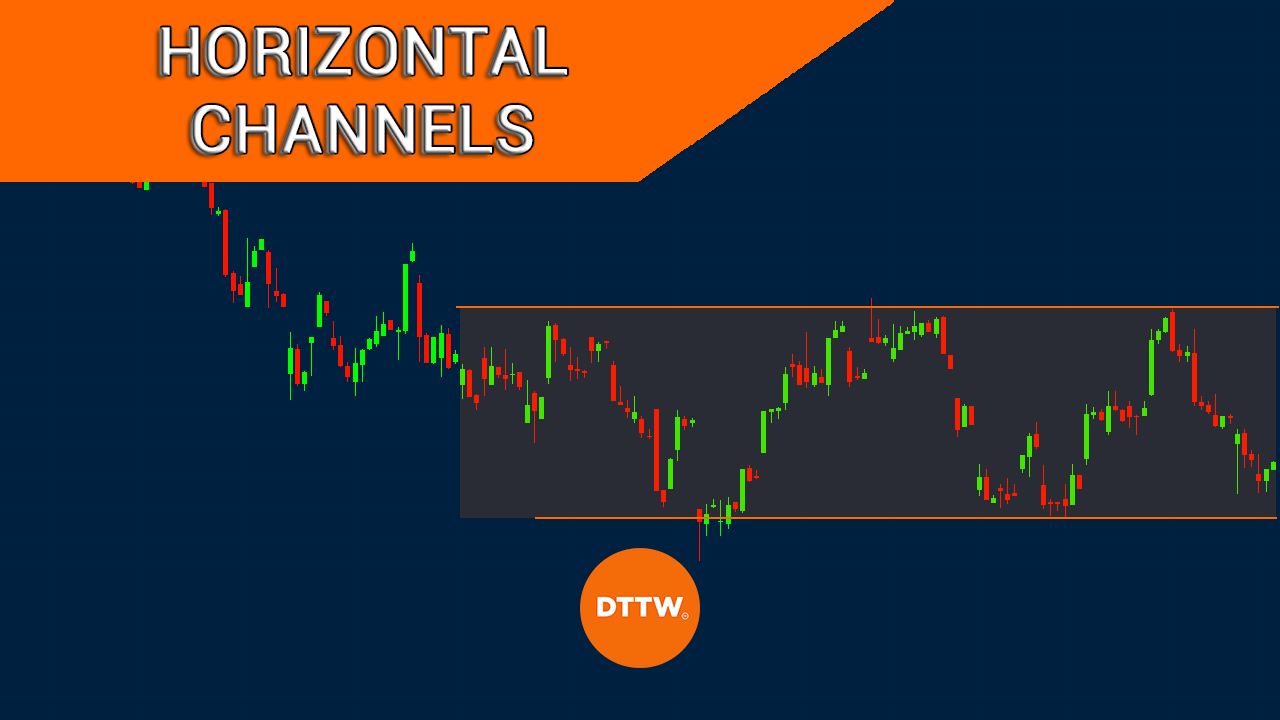 In this article, we will explain what horizontal channels are, how they form, and how to trade them in the financial market.

What are horizontal channels?

A horizontal channel is a situation where an asset consolidates between support and resistance levels. The pattern resembles a rectangle and it consists of at least four contact points.

It can happen in all chart patterns from 1 minute to yearly charts. At the same time, the pattern can be extremely narrow or really wide depending on market conditions.

A horizontal channel is usually a sign of indecision among market participants. It is also a sign of fear since investors are usually afraid of moving above the resistance and below the support level.

For starters, here is a brief definition of support and resistance (skip it if you already know it): a support is defined as a floor where a price struggles to move below while a resistance is a level where it fails to move above.

As a trader, it is almost mandatory to know how to identify these two levels.

How to draw them

Drawing horizontal channels is a relatively easy process since most trading platforms provide tools to do so. The chart below shows how to access the tools needed to draw horizontal channels. You can also find them easily in other platforms like MT4, MT5, and ThinkorSwim among others.

Second, after identifying the drawing tool, the next stage is to use your eyes to see the chart’s price action. In most cases, you can see the horizontal patterns by just looking.

It is also recommended that you do a multi-timeframe analysis to find out whether you can see the pattern. For example, what you might call a narrow consolidation in a daily chart can be a wide horizontal channel in an hourly chart.

A common question among investors is the difference between horizontal levels and ranging market. There are key differences between the two.

First, an asset can remain in a tight range without being in a horizontal channel.

Second, a ranging market is not always horizontal. For example, in the chart below, we see that the stock is in a consolidation phase even though it is in an upward trend.

Buy at the support and short at the resistance

There are several trading strategies to use when trading with horizontal channels. First, there is the opportunity of buying when the price moves to the support level and then wait for it to move to the resistance point.

At the same time, you can place a short trade when it moves to the upper side of the channel. A short trade is one where a trader makes money when its price drops.

The challenge of this strategy is to spot a bullish breakout when the price rises above the resistance or when it makes a bearish breakout after moving below the support.

One of the best strategies when trading horizontal channels is to use pending orders. A pending order is where you tell your broker to initiate a trade at a certain point.

For example, assume that the horizontal channel’s support and resistance levels are at $10 and $12. In this case, you could place a buy-stop at $13 and a sell-stop at $8. You can then protect these trades with stop losses and take profits.

This is one of the most ideal strategies to trade horizontal channels. However, it has the challenge of false breakouts.

As mentioned, a false breakout is a situation that happens when the price moves outside the range and then quickly moves back to the channel. A good example of this is shown in the chart below.

As you can see, the Alphabet stock price made a bearish breakout and then resumed the bullish trend. In this case, the trader would make a loss if the sell-stop was triggered.

Another strategy to trade horizontal channels is known as break and retest. The strategy behind this is simple. In most cases when a stock makes a bullish breakout, it tends to retest the resistance level.

There are two main ways to trade this pattern.

First, you can decide to set a buy-limit at the previous resistance. In this case, a buy trade will be initiated when the price moves to that level. However, this is a relatively risky trading approach since the asset could continue the bearish trend.

The second strategy is that of placing a buy-stop at the period’s high. The belief is that the price will continue rising since there are enough buyers to push it higher.

Still, there is a risk when playing the break and retest pattern. As shown below, the stock made a breakout, retested the support, and then continued rising.

In this article, we have looked at horizontal channels and how to trade them effectively, We have seen that they are easy to use and how to identify them. Also, we have noted some of the top strategies to trade using the pattern.