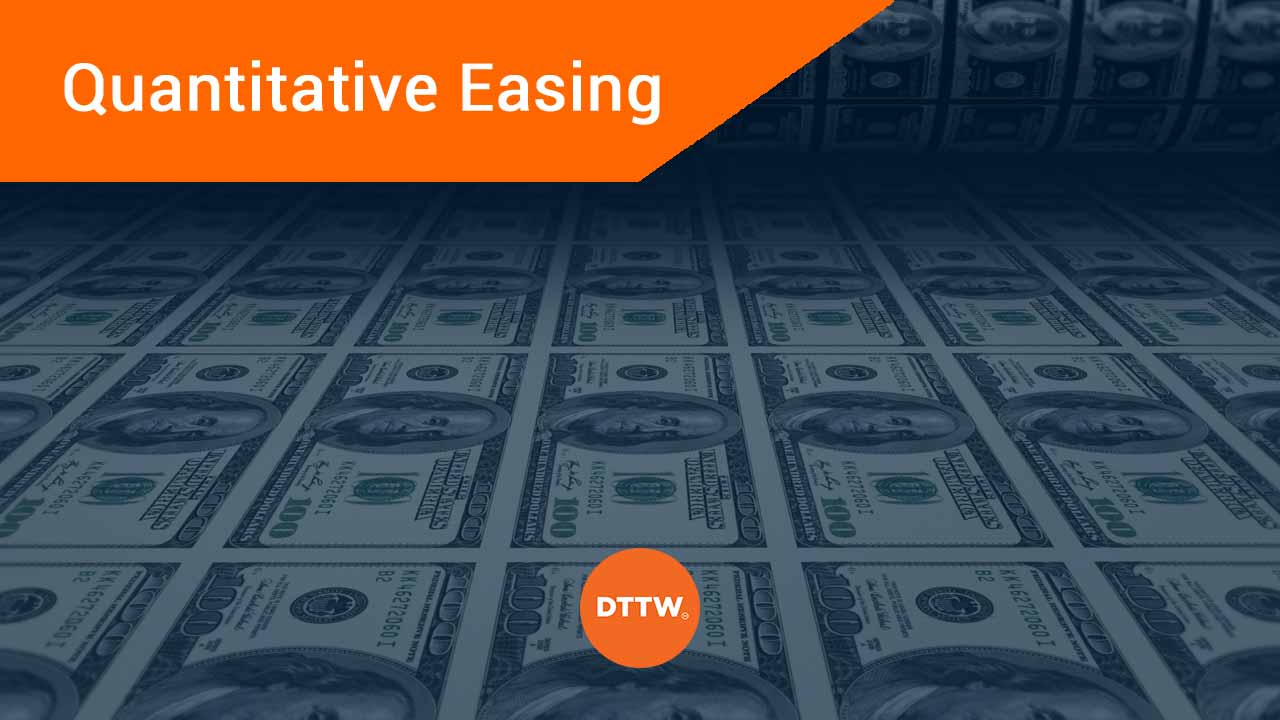 Quantitative easing (QE) is one of the several tools that central banks have to respond to major crises. It was one of the popular strategies used by banks to respond to the 2008 Global Financial Crisis and the 2020 coronavirus pandemic.

In this article, we will look at what quantitative easing is and how traders can use it.

Role of central banks in QE

To understand QE, you need to first know more about central banks and their role. A central bank is an independent institution that is given the mandate to supervise the financial sector and set the monetary policy.

In most countries, central banks have what is known as a dual mandate. This refers to the mandate of ensuring that prices are stable and that the economy has a low rate of unemployment.

In most developed countries, the level of price stability is when the rate of inflation is at or below 2%.

Central banks have many tools that helps them achieve this mandate. For example, they are the only institutions that can set interest rates, which then influences the cost of lending.

When an economy is going through challenges, a central bank can easily slash interest rates. This will in turn incentivize more borrowing and spending. In turn, it will help improve the economy.

During the pandemic, central banks came up with other tools like yield curve control and bond purchases. In yield curve control, a bank comes up with a yield it wants the government bond to have and then buys as much bonds as possible.

» What is the yield curve in Trading?

What is quantitative easing?

Quantitative easing refers to a situation where a central bank decides to buy a lot of government bonds to respond to a crisis. It does this by creating money from thin air. This makes the process only relevant to developed countries with a strong currency.

Indeed, the only central banks doing QE are in developed countries like:

These countries have currencies that are widely accepted worldwide. Also, in the past decade, they have gone through a period of low inflation. Therefore, the central banks can afford to print money without risking overinflation.

On the other hand, many countries in developing and emerging markets cannot afford to use QE. That’s because their currencies are mostly local and have no value outside their borders. As a result, when they print a vast amount of cash, they will create hyperinflation.

The idea behind QE is relatively simple. In times of a crisis, the bond market could become dysfunctional. That’s because many investors will rush to sell the government bonds that they own.

Since bond prices are inverse to the yield, the overall yield will rise and make it expensive for a government to borrow.

This is where the central bank steps in.

Because of its ability to print money, the bank will decide to do exactly that. It will print money and buy as much government bonds as possible. This will, in turn, make it cheap for the government to borrow money and help to support the economy.

During the coronavirus pandemic, the Federal Reserve came up with an open-ended quantitative easing (QE) program. In it, the bank set to buy at least $120 billion worth of government bond and mortgage-backed securities as possible.

In turn, this led to a substantial expansion of its balance sheet, as shown below.

In Japan, the BOJ bought more than $1 trillion in debt. Indeed, the BOJ now holds more than $7 trillion worth of assets. This is substantially higher than the country’s GDP of more than $5 trillion.

It is worth noting that the central bank does not limit itself to government bonds in QE. It can also buy other bonds like corporate and municipal. That’s because in times of crisis, investors also tend ti run away from these bonds, leading to inefficiencies. It also buys mortgage-backed securities.

Therefore, with all this in mind, how does quantitative easing affect traders? There are several ways this happens.

For example, in 2020, when the Fed launched its open-ended QE program, all major assets like stocks, commodities, and cryptocurrencies soared. In other words, QE usually creates a perfect condition for a risk-on sentiment.

Second, signs of tapering usually lead to shocks in the financial market. A few years ago, when the Fed started to slow its asset purchases, it led to a situation that is known as taper tantrum. In it, the yields on government bonds rose and stocks fell.

Therefore, this usually leads to a strong performance of emerging market currencies and assets. On the other hand, when QE starts to fade, it leads to weakness in the EM.

Quantitative easing is an important tool that many developed countries are using to respond to crises. In this report, we have looked at what it is and its implications in the financial market.