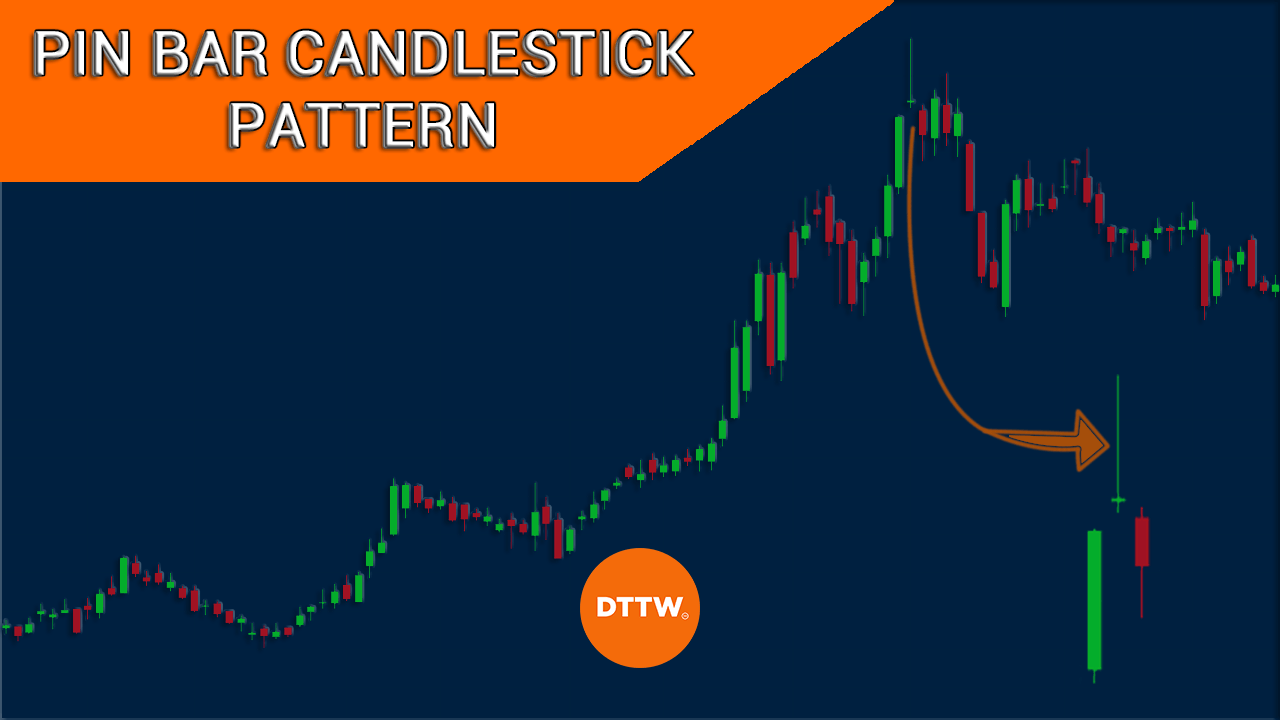 Candlestick patterns are an important part of day trading and investing. A single candlestick pattern can give more details about whether the bullish trend will continue or whether a reversal is about to happen.

There are many candlestick patterns, including hammer, bullish engulfing, and doji. In this article, we will look at the pin bar and explain how to use it.

For starters, a candlestick is made up of two main parts. First, there are shadows, which are the thin lines that happen below and above the body.

Related » How Relevant Are the Highs and Lows in Trading?

It is worth noting that some candles don’t have an upper and lower shadow (like marubozu). This usually implies that the open price was the highest point while the closing price was the lowest point.

What is a pin bar?

A pin bar is a single-bar candlestick that is made up of a small body and a long upper or lower shadow. In most cases, the bar is formed between a bullish and bearish candlestick. When this happens, it is usually a bearish pin bar pattern.

On the other hand, it happens between a large bearish and large bullish candlesticks. The chart below shows how a bullish and bearish pin bar pattern looks like.

How to spot a pin bar pattern

However, it is worth noting that the tool is not accurate. Instead, it should be used as a starting period for this analysis.

Another approach is to use visual analysis to find the pin bar pattern. This is where you just look at the chart and identify it easily. As you do this, there is a possibility that you will also spot other chart patterns in the chart.

Most importantly, you should do a multi-timeframe analysis to ensure that you get a bigger picture about the situation.

It is also worth noting that a situation known as a double pin bar can happen. This is a situation where the initial pin bar pattern is followed by another pin bar.

What does a pin bar tell traders

First, there are continuation candles that send a picture that an asset’s price will continue moving in the existing direction. A good example of a continuation pattern is the three white soldiers pattern. When it forms, it usually sends a sign that the bullish trend will go on.

Second, there are reversal patterns that send a picture that a new trend is about to emerge. Examples of popular reversal candlestick patterns are hammer, doji, and morning and evening star.

A pin bar usually sends a message that a reversal may be about to form in the market.

A common pin bar trading strategy is the contrarian one. This one refers to a situation where a trader assumes that the original trend will continue. As a result, instead of opening a reversal trade, they go in the opposite direction.

To mitigate risks, they approach this situation using pending orders. In this case, in case of a bearish pin bar, they usually set a buy-stop above the upper shadow. If the view is correct, the bullish trade will be initiated.

A good example of this is in the chart below. A trader would have placed a buy-stop at $65.47. If the bearish set-up was invalidated, the trade will then be initiated.

In this case, the sell-stop will be triggered if the pin bar pattern is confirmed. At the same time, the stop-loss will help to protect you if the pattern is not triggered.

Combining with other patterns

Another approach of using the pin bar pattern is to combine it with other chart patterns and technical indicators.

For example, in the case of the pin bar shown above, you could add a moving average on the chart. In this case, a more bearish chart pattern will be confirmed if the price manages to move below the moving average.

The pin bar pattern is a useful reversal pattern that can be used by both traders and investors. It is not a popular chart pattern in the market. Still, using the three strategies mentioned above will help you be more successful in it.