Evergreen Psychological Tips for Trading During a Recession 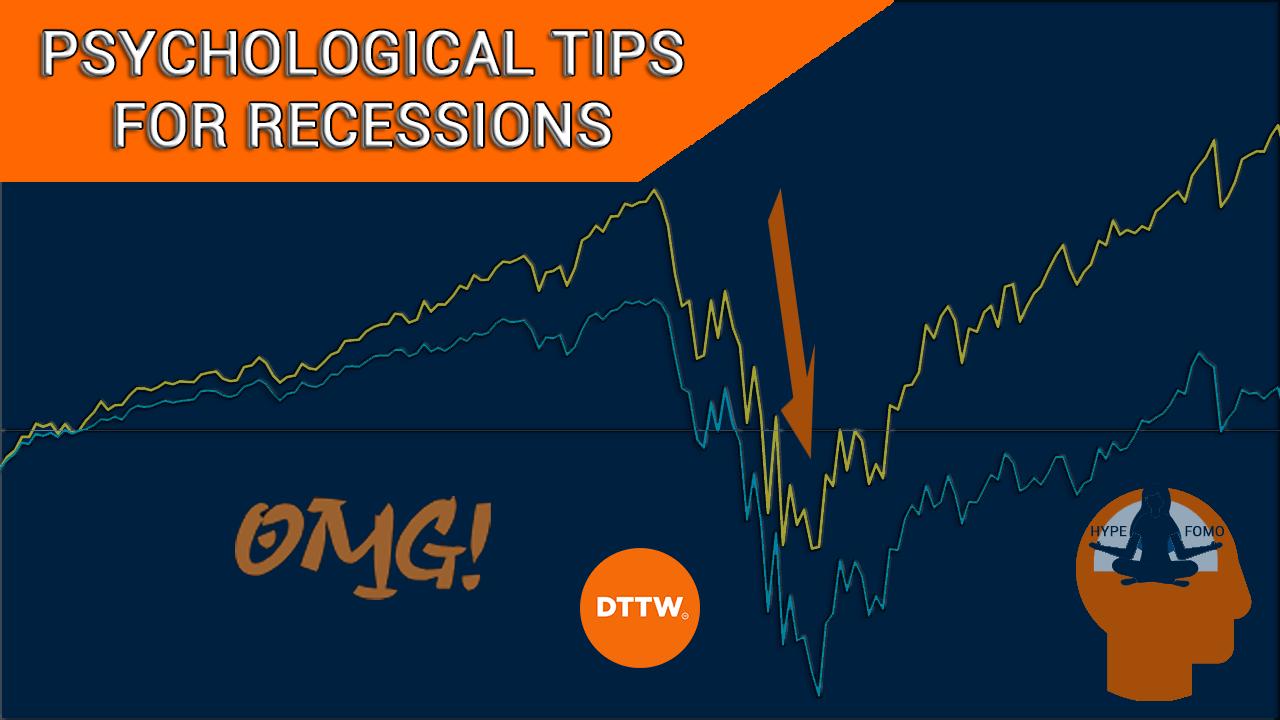 A recession is a difficult period when the economy sees a dramatic decline, which then drags the performance of key assets.

It is one of the most dreaded periods in the market as happened during the dot com bubble and the Global Financial Crisis (GFC).

In this article, we will look at what a recession is and some of the best trading tips.

What is a recession?

A recession is defined as a period when a country’s economy contracts in two consecutive quarters. It is usually characterized by higher unemployment rate, weak consumer and business confidence, and low inflation.

In most periods, a market recession implies a period when stocks go through a major dip. Some of the most common market recessions are the 1929 depression, 1987 crash, dot com bubble, Global Financial Crisis, and at the initial days of the Covid-19 pandemic.

In all these periods, major indices like the Dow Jones and S&P 500 lost over 30% of their value.

How to trade during a recession

A good benefit of the financial market is that you can make money when stocks are rising and falling. Ideally, when assets are rising, you initiate a buy trade and benefit as the bullish trend continues.

On the other hand in a recession or when stocks are falling, you typically make money by short selling. This is a complex process that involves borrowing shares, selling them for cash, and buying them later at a cheaper process.

Brokers like Schwab and Robinhood have simplified the process of shorting. As such, you just need to press a sell button and the order is executed.

This is a situation where a stock you are shorting goes parabolic. So, here are some of the best psychological tips to trade during a recession.

A common mistake that people make when trading during a market sell-off is to avoid picking bottoms. This simply means that you should avoid entering bullish trades unless you see good signs of a bottom.

In most periods, picking a bottom or buying the dip during a bear market will often lead to substantial losses.

Instead of picking a bottom, we recommend that you study the main reasons why stocks are falling and then come up with potential scenarios.

For example, if the recession is happening because of an extremely hawkish Fed, don’t pick a bottom before it changes its tone. In other words, don’t attempt to fight the Federal Reserve.

For long-term investors, you can avoid timing the market using a trading strategy known as dollar cost averaging (DCA).

This is a trading strategy where you divide your funds and buy an asset several times as it drops. DCA will help you in several ways. For example, you will still have some cash on hand if the stock sell-off continues.

On the other hand, you can use the dollar cost averaging strategy and divide these funds into tranches. You can spend the first $20,000 when the stock is at $10. If the sell-off continues, you can spend another $10,000 on the shares when they drop to $8.

The next one at $7 and the final one at $6. If there is indeed a recovery, you will make more money than someone who bought all the shares at $10.

Another important psychological tip when trading in a bear market is known as fear of missing out (FOMO). It refers to a situation where a trader does what the crowd is doing. For example, during a bear market, there will often be some pumps.

If you embrace a FOMO approach, you will find yourself buying assets during such pumps and then lose money when the dumping happens.

A good example of such a situation is shown in the chart below. As you can see, the asset is in a strong bearish trend when it suddenly goes parabolic. In most cases, traders who do that find themselves losing money.

Another important psychological tip is that you should always have a plan when trading during a recession. There are several plans that you can use in this period.

For example, as a trader, you can focus on trading pre-market movers. A good trading watchlist can help you to take advantage of price movements in the market.

For example, if a stock has risen by more than 10% in premarket trading, identify why it is soaring and then come up with a plan to trade it.

All your trading plans should have a stop-loss and a take-profit to protect your assets. Also, you should not always buy the dip.

Another psychological tip when trading during a recession is on risk management. This is a process where you work to mitigate the risk of opening a trade. There are several strategies you can use in all this.

For example, as mentioned above you should always have a trailing stop-loss. A trailing stop is a tool that stops your trade automatically when it falls to a certain point. Unlike an ordinary stop, this trailing one usually moves with the asset.

Second, always look at your trade sizes. Ideally, you want to open small trades that don’t put your trades at risk.

Third, always look at the correlation of assets that you hold. For example, buying stocks like ExxonMobil and Chevron exposes you to risk since these shares tend to move in the same direction.

A recession is a difficult time for the market. In this article, we have explained what a recession and a stock market sell-off is and some of the top strategies to use. A

nother important approach is to have confidence in the market. Also, have a good picture about the financial market and what is moving stocks.