How to Spot & Trade with the Shooting Star Candlestick Pattern 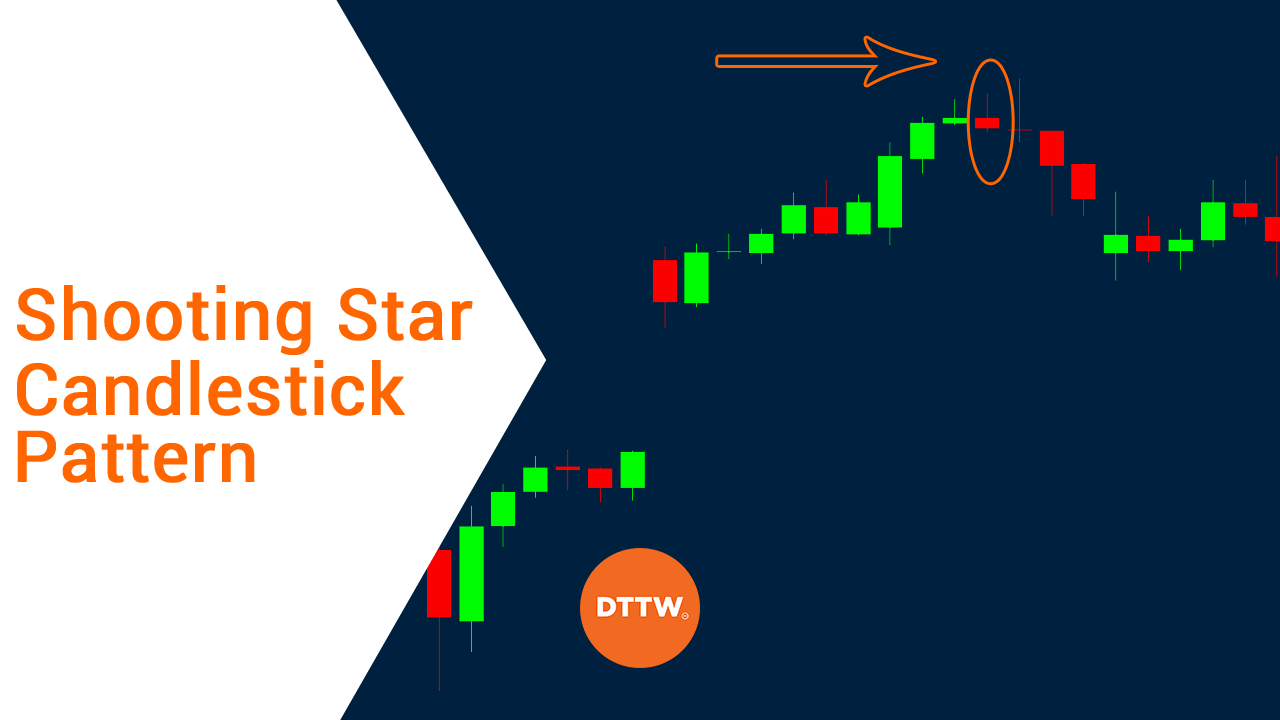 Price action trading strategies focus on the movements of the market based on previous price fluctuations. With the obtained information, a trader is able to make subjective decisions on the direction of the asset.

As a trader, you can observe the market through simple patterns such as price bars, trend lines, or breakouts. On the other hand, you can go for a detailed combination of channels, volatility, and candlesticks.

In past articles, we have looked at several price action strategies including

In this one, let us take a look at the shooting star and how to use it in the market.

What is a shooting star pattern?

This is a bearish candlestick whose formation occurs in instances where a security opens and advances significantly, but ends up closing the day at almost where it opened. It is characterized by a long upper shadow, a small or no lower shadow, as well as a reduced real body near the day’s low.

In order for a candlestick to be termed as a shooting star, its formation has to occur in the midst of a price advance. Additionally, the stretch between the opening price and the day’s highest price has to be at least twice as big as the body of the shooting star.

The region below its real body should also have a small or no shadow.

What does shooting stars mean?

A shooting star tells you that a financial asset jumped sharply when the market or the candle opened. It then stabilized close to the upper side of the candle and then moved to the next candle.

When it happens, it tells you that the currency pair or asset may soon turn around in a bearish manner. Still, like all other candlestick patterns, it should be used using a combination of other tools.

In a shooting star pattern, the long upper shadow is usually a sign of people who bought early and are now in a loss-making position since the price slipped back to the opening.

It is worth noting that a shooting star pattern is not always a sign that a financial asset will reverse and start a new bearish trend.

Most traders usually wait for a confirmation of the pattern before they enter a trade. For example, they can look at the second and third candlesticks that form after the shooting star pattern.

How to spot it

The shooting star pattern has several key characteristics. First, it has a long upper shadow and a small or no lower shadow.

Second, it happens after the asset makes a major bullish trend. Third, it can be in either colors. Finally, you can use it to place a stop-loss or a take-profit when trading.

How to trade this pattern

As a trader, it is fairly easy to determine your next move by using this pattern. With reference to the chart above, the expected effect is lower prices.

As such, we need to identify entities to short. Based on the observation that prices were earlier rejected at the shooting star’s high, it will be practical to place a stop loss order at the last swing high (the red horizontal line).

If you are a conservative trader, trade the wick’s retest (the black dashed line). If you are rather aggressive, enter the trade at the opening of the next candlestick.

How to spot a signal using a shooting star pattern

So, how do you spot a signal using the shooting star pattern? First, you need to ensure that the asset’s price is in a bullish trend. Second, as mentioned above, this pattern is characterized by having a small body and a long upper shadow.

After spotting such a pattern, the right thing to do is wait for a confirmation that a trend reversal is indeed happening. Finally, it is recommended that you do a multi timeframe analysis to identify key support and resistance levels for your trades.

It is easy to confuse the two candlestick patterns since they are similar in appearance. Both of them have a small or no lower shadow, tiny real bodies that are close to the candle’s lower portion, as well as long upper shadows.

Despite these similarities, their contexts are different. On the one hand, a shooting star is formed as a result of a price advance. It usually indicates a probable turning point lower.

On the other hand, an inverted hammer results from a price decline and denotes a prospective turning point higher.

› What is a Hammer Candlestick?

The shooting star pattern is often confused with a hanging man. The two are usually reversal patterns that form at the top of a major rally.

The shooting star pattern, on the other hand, is the opposite since it has a small body and long upper shadow.

Benefits and Drawbacks of the shooting star candlestick pattern

Is the shooting star a bullish or bearish pattern?

In most cases, the shooting star is usually a bearish pattern. When it forms, it is usually a sign that the financial asset will start a new bearish trend. However, it is important to be patient and wait for a confirmation before you enter a bearish trade.

How accurate is the shooting star pattern?

This tool is not always a highly accurate pattern in day trading. At times, it is possible for a financial asset to continue rising even after a shooting star pattern forms.
However, if you use the strategies mentioned above, you will be at a good position to avoid risking too much money.

Similar to other price action trading strategies, the shooting star is one of the trading tools that can’t be dismissed in the trading world. Indeed, it is a simple system to identify and use.

However, it is still important to couple it with fundamental and technical analysis.