9 Best Streaming Stocks to Day Trade or Invest In 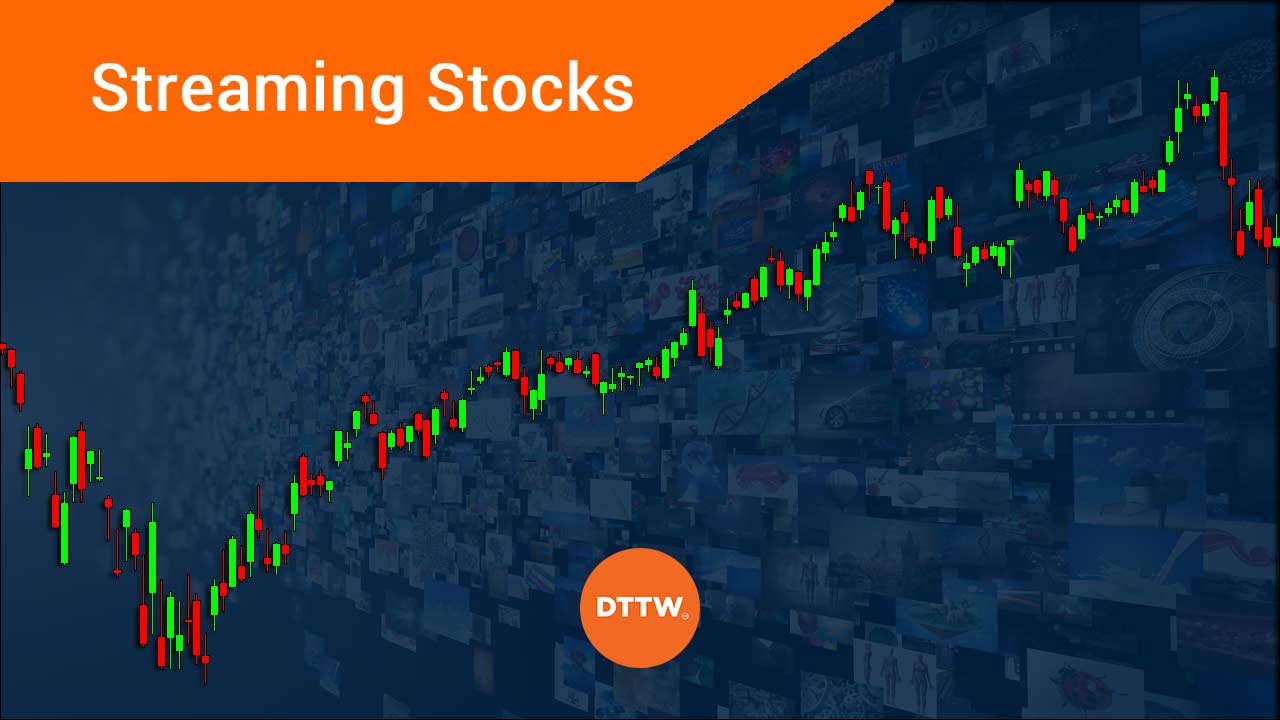 The video streaming industry is rapidly growing, helped by the significantly fast internet speeds and competition. The industry was estimated to be worth more than $50 billion in 2020 and to grow at a compounded annual rate of more than 20% in the next few years.

To get a better idea, take a look at this Google Trends chart from the last 5 years.

The first thing that jumps out at you is the steady growth of searches around Netflix and Amazon Prime, two of the biggest competitors (while 'streaming' as a generic word goes down more and more).

And then the explosion given by the start of the Pandemic from Covid, which practically doubled the global interest. The trend is obviously down now, but the levels are still higher than two years ago. And these are just two of the players.

This article will look at how the streaming industry works and some of the top streaming stocks to trade.

Video streaming is a relatively simple concept. In the past, many Americans used to buy movies from some of the local dealers. The biggest one was Blockbuster that had more than 9,000 stores in the country. There was no streaming option at the time because the technology did not exist and the internet was relatively slow.

While some video streaming companies existed at the time, the biggest disruptor was Netflix. At a time, the company’s founder, Reed Hastings, wanted Blockbuster to buy it. When the deal failed, he decided to pivot his DVD delivery business into streaming.

The concept behind video streaming is relatively easy. A company like Netflix buys rights to movies and television series from their creators. They also spend billions of dollars creating content that they will own forever. They then upload these movies to data centers and create a platform where people can subscribe to.

Their customers pay a small fee every month and they can unsubscribe at any time. A Netflix subscription goes for less than $15 per month. Second, there are companies that use a hybrid model that combines advertisements and subscription. YouTube and Hulu are two of the most popular platforms (for anime the best is instead Crunchyroll).

Another category of video streaming is based on content type. There are broad platforms that include all segments of the industry like Netflix and Disney+. There are also niche companies like Curiosity Stream that focus on documentaries.

At the same time, there are streaming services that focus mostly on games. The most popular companies in the sector are Huya and Amazon, which owns Twitch.

The Netflix stock is one of the most actively traded stocks in the United States and is a member of the FAANG group. The company adds millions of new customers every month and spends billions of dollars in content creation.

Amazon is a leading player in video streaming in three main ways. First, the company owns Amazon Prime Video, a standalone service that also acts as an add-on for its Prime service. Prime subscribers get several products, including free delivery and free music streaming.

The product is also available for a fee to users who are not members. While Amazon does not declare its numbers, it is estimated to have more than 170 million subscribers. Still, this segment is just a small part of Amazon’s business.

Second, the company makes money in streaming since it is the leading data center provider to many companies in the sector. Amazon’s AWS powers Netflix, ViacomCBS, and Disney.

Finally, Amazon makes money through Twitch, which is the biggest game streaming service in the world.

The next big streaming stock you can invest or trade in is Walt Disney. The company is one of the biggest media companies in the world. It owns theme parks, television stations, cruise line, and Disney+.

Disney+ has become one of the fastest-growing streaming services in the world. The service has added more than 100 million subscribers in less than two years. They are attracted to the company’s big library of content that caters to people of all ages.

ViacomCBS was created after the merger of Viacom and CBS in 2019. The company is a large media conglomerate that owns some popular brands like MTV, BET, CBS, Comedy Central, and Nickelodeon, and Pluto TV.

It also owns several streaming companies like Paramount+ and CBS. These services have millions of subscribers from around the world.

Alphabet is a member of FAANG and is also a leading player in the video streaming industry. The company owns YouTube, the biggest player in the sector that has millions of users globally. YouTube is a hybrid platform that has an ad-supported model and a paid service.

Like Amazon, Alphabet also makes money by providing services to companies in the video streaming sector like Netflix and Disney.

The Video on Demand service launched by Apple in November 2019 operating in the Internet distribution of movies, TV series and other paid entertainment content. It was one of the initiators, along with Disney+, to trigger the so-called 'streaming war' that we had talked about quite some time ago.

Huya is a Chinese game-streaming company that is worth more than $3.9 billion. The company has more than 198 million users and it makes money through advertisements and subscriptions.

Roku is another video stock you can invest in or trade. The company provides services that help all these streaming companies get seen on television. It sells a cheap device that allows streaming. Recently, it has also started to invest in its content.

Discovery is a well-known brand that has millions of users through its Discovery+ product. In 2020, it was reported that the company would merge with Time Warner, in a deal that will create a $150 billion company.

The streaming business is seeing robust growth globally. This trend will likely continue in the future as people abandon cable. In this article, we have looked at how it works and some of the popular streaming stocks to trade or invest in.