The Best Commodities to Trade (at Least Once): Recent Trends! 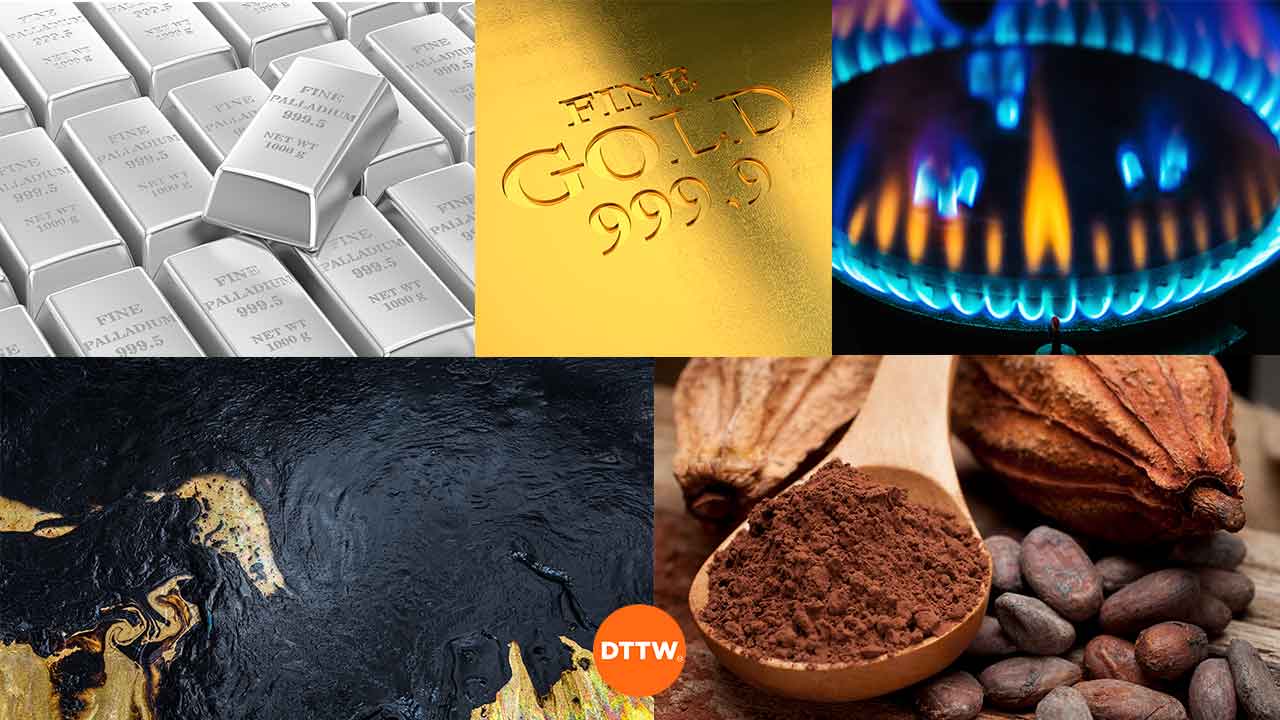 You possibly love trading stocks, currencies, or indices. To many traders, these are the most important financial assets to trade.

However, to others, the best assets are commodities. This is because of the integral role these play in the world economy.

In fact, commodities are the most important assets in the world without which, other assets would not exist.

For example, without crude oil, a country like Saudi Arabia would not have a meaningful economy. Without dairy and other agricultural products, the New Zealand’s economy would not be as strong as it is today.

All commodities are not equal

There are two main groups of commodities: the hard one and soft one.

The metals are then subdivided into industrial and precious metals. The industrial metals are: aluminum, zinc, tin, copper, nickel, and titanium among others.

The precious metals are gold, platinum, palladium, silver, and Iridium.

Agricultural commodities are then divided into softs and coarse grains. The softs include coffee, tea, cocoa, and timber while coarse grains are corn, soybeans, rice and wheat among others.

Before Trading, Traders should consider the liquidity and the access to financial information of the commodities before trading.

As mentioned above, maybe this is the most important commodity in the world. It enables mobility and the production of other commodities. For example, without it, farmers would not be able to produce crops in large scale.

The benefit of trading in crude oil is the easy access to financial news about it. In terms of liquidity, it is the most liquid commodity.

In addition, you can easily interpret the financial data about it by simply understanding the readily available data on demand and supply.

→ How to Analyze and Make Decisions on Crude Oil

Natural Gas is found deep inside the earth’s crust. The gaseous commodity is mostly used as a source of energy. Most power plants are now moving from coal to the natural gas.

As more countries have discovered natural gas deposits, and as technology get advanced, the supply of natural gas has become more than the demand making its price decline from $15 to under $3.

Traders should try this commodity because of the access to information and volatility.

Gold is a very important metal, which is found deep inside the earth’s crust.

For centuries, gold was used a currency during the exchange of goods and services. Since its supply was limited, governments adopted fiat currencies which are usually backed by gold.

As a result, most investors and governments buy and invest in gold as a store of value. As a raw material, gold has no major uses apart from jewellery and ornaments.

Traders should try trading in gold because of its volatility and the access to its news.

→ Why You Need Some Gold In Your Portfolio

A few years ago, no one used to talk about palladium. In fact, most people didn’t know what it was and what it does. Then, since 2018, it outperformed all commodities, including its close sister, platinum. This performance has happened because countries have put in place more laws to prevent emissions.

Palladium is used in the manufacture of vehicles and machinery as a catalytic converter. You should try it because of the rising demand as more investors start focusing on it.

To trade palladium, you should look at the automobile market, strength of the dollar, and the overall performance of the global economy.

Silver is one of the most common metals you can trade in the market. It is also provided by most brokers. The metal is important because it is often classified as a precious metal. Also, it has a close relationship with gold.

In fact, most traders view silver as a cheaper way to leverage on the price of gold.

Further, you should pay attention to any supply and demand dynamics.

Platinum is another popular metal you should trade in the market. The metal belongs to the same class as palladium. Most of the metal is mined in South Africa, Zimbabwe, and Russia. It is used in the manufacture of jewellery and cars.

To trade the metal, you need to look at the overall performance of the automobile market and the health of the global economy.

Cocoa is an important agricultural commodity that mostly comes from Ivory Coast and Ghana. It is used to make beverage drinks and chocolates.

In the past, eating chocolate was mostly a reserve of Western countries. Today, countries in Asia are discovering the sweetness of chocolate.

At the same time, the producers of Cocoa are embracing technology to improve yield. All this, coupled with the low oil prices has made the price of cocoa decline.

Coffee is one of the most popular drinks in the world. Asian countries have also started to love the drink!

In recent years, the coffee market has been going through increased oversupply and the price fell down. This happened mainly due to the exaggerated production and the decline of the Brazilian Real against the dollar.

→ How to Trade Coffee futures profitably

Soybeans is probably the most active soft-commodity in the market because of the biggest buyer and seller. The US is the world’s biggest producer of soybeans while China is the biggest buyer.

The price also rose because if a new disease that led to the death of millions of pigs in China.

As we mentioned above, all commodities are not created equal. As a result, before you start trading on commodities, you should do a lot of research to understand the dynamics of demand and supply.