Will the Bullish Trend Last? The Three White Soldiers Pattern 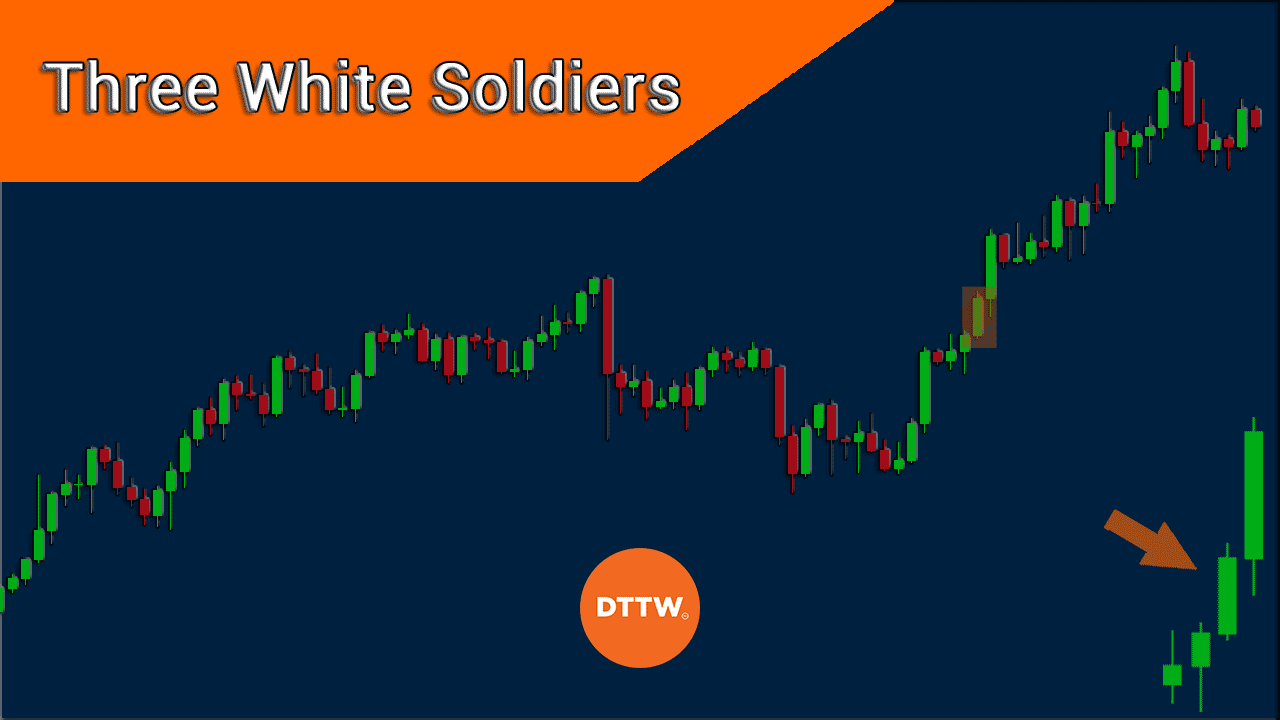 The three white soldiers is a relatively uncommon candlestick pattern that is used to identify signs of a bullish continuation. The pattern is the opposite of the three black crows pattern that is usually a sign that a bearish trend will continue.

In this article, we will explain what the three white soldiers pattern is and how you can use it to trade.

What is the three white soldiers pattern?

The pattern usually happens after an asset like a stock, cryptocurrency, and commodity has been in a relatively strong bearish trend and represent as a sign of continuations.

The three white soldiers derives its name from the movements of soldiers. When you see three soldiers moving, there is a likelihood that they will continue matching in the same pattern.

How the three soldiers pattern form

The three white soldiers are a gradual and steady rise with each white line opening near or within the previous white real body. As a result, each of these candles should close at or near the previous highs. In most cases, the second candle should be longer than the second one.

The three white soldiers pattern can be seen in all timelines of the chart. For example, you can see it in a daily, weekly, or even a hourly chart.

What does the pattern tell you?

The three white soldiers pattern usually tells you that there is an advancing bullish trend of an asset. It tells you that there are more buyers than sellers in a given period. This is more so when you identify the pattern on a longer chart like a daily or weekly chart.

For example, when you see it in a weekly chart, it tells you that an asset has been getting more demand in the past three consecutive weeks. As such, unless of a major event, the path of the least resistance for the asset will be to the upside.

At times, the third candle will be followed by a small bearish candle. This is normal since traders tend to have a pulllback after a major rally.

How to trade the three white soldiers pattern

There are several approaches of trading this pattern. First, you can initiate a bullish trade after the third candlestick. In this, you will be buying a period you believe that the price will continue with the bullish trend.

Second, you can decide to use a pending order. Pending orders are different from market orders in that they are not executed instantly. For example, if a stock is trading at $100, you could place a buy-stop at $105. In this case, the asset will open a bullish trade if this level is reached.

Third, you can use the pattern in combination with technical indicators and charting patterns. For example, you could use the pattern together with the Relative Strength Index (RSI). The RSI is an oscillator that looks at the strength of a trend. If the three white soldiers is happening and the RSI is at 40 and rising, it means that the price will likely keep rising since the RSI has more room to run before it gets overbought.

You could also use the three white soldiers pattern with an indicator like moving averages. In this, the bullish trend will likely remain intact as long as the price is above the moving average.

The chart below shows the three white soldiers at work in Bitcoin. As you can see, the bullish trend continued after the coin rose for three straight days.

The two candlestick patterns are similar. The only difference is that the black crows happen during a bearish trend. As such, traders use them in a similar method but in a different direction.

There are several benefits of using the three white soldiers pattern. For example, it is a pattern that is relatively easy to use and identify. It can also work in all periods. On the othe hand, the main cons are that it is often rare and can often give the wrong signals.