Top Lessons from the 2008 Financial Crisis 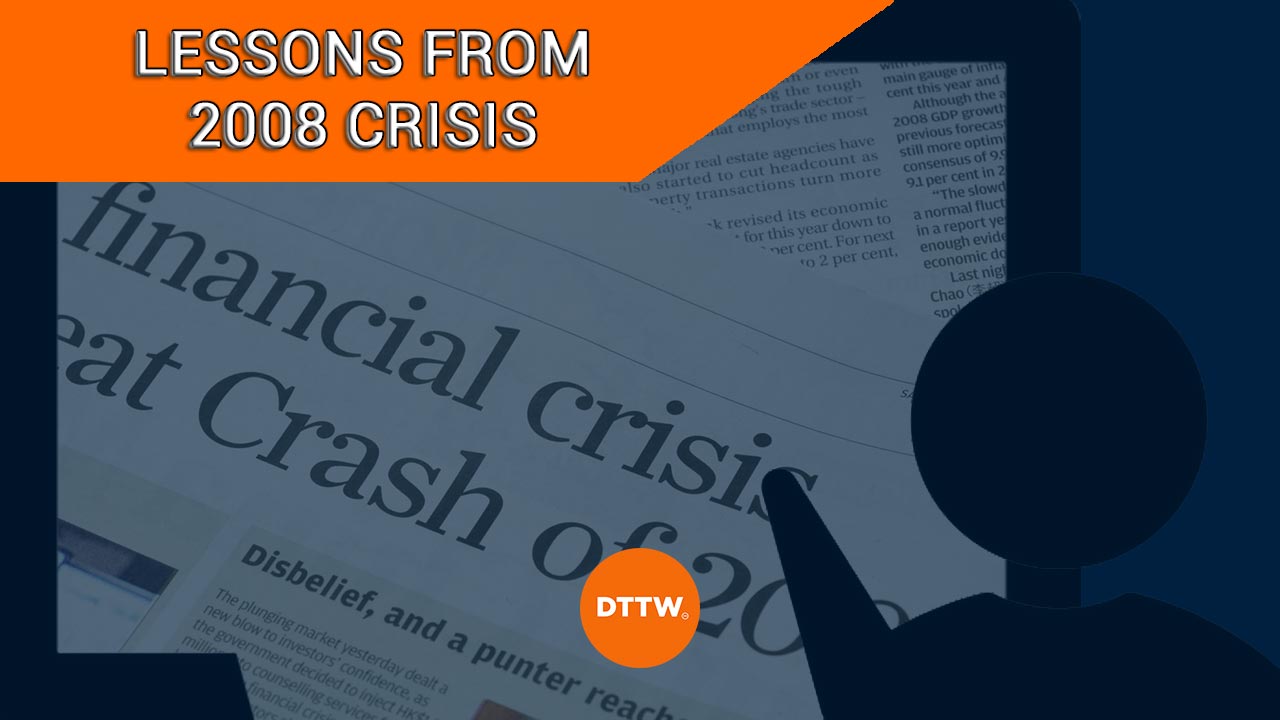 The Global Financial Crisis (GFC) of 2008/9 is one of the most important parts of the American financial market.

The crisis led to substantial losses in the market, a large government bailout of Wall Street, and the collapse of important institutions like Bear Sterns and Lehman Brothers.

In this article, we will explain what caused the crisis and some of the top lessons to learn from it.

The causes of the crisis

The 2008 crisis was caused by a combination of factors. In the period of George Bush as president, he removed many financial regulations. As a result, banks had a frenzy.

They created financial instruments known as CDOs (collateralized debt obligations) and MBS (mortgage backed securities). These instruments allowed people, even those who had a bad credit history to take mortgages.

In 2008, the house prices started coming down and people started defaulting on their obligations. Banks like Lehman Brothers, Merrill Lynch, and Bear Sterns were the most affected. They had given out so much loans. When the crisis started to unfold, Bear Sterns was bought for pennies while Lehman Brothers collapsed.

These banks were insured by AIG, then, the biggest insurance company in the world. When the banks collapsed, the company also suffered but it was saved by the taxpayers.

At the end, many Americans and many money managers went bankrupt. People like Ken Griffin and David Einhorn lost billions of dollars.

Lessons from the financial crisis

The first lesson is that nothing is permanent. This is, we believe, one of the most important lesson anyone needs to learn from the crisis. Lehman Brothers was once one of the largest banks in the United States with more than 20,000 employees. It had iconic buildings and prestige.

However, at the final day, the company collapsed with international media watching. We watched its employee pack their belongings and go home jobless.

As a trader and as a human, you need to realize that nothing you own or a situation you are at is permanent. You might be doing so well but one day, you might be at a loss. Therefore, live your life knowing that without being biased.

The second lesson is on the bullish and bearish markets. As a trader, you need to realize that bear and bullish markets never last forever. They come and go.

Before the crisis, the market was on an uptrend with records being shattered every month. As a result, most investors decided to put their money on the long trades. Then, when the crash came, they lost money.

A good look at investors who made money during that time shows that none of them were long-only investors.

A person like Jim Simmons of Renaissance made more than 70%. He made his money because of his long-short strategy where he buys undervalued companies while shorting those he believes are highly valued.

In addition, the GFC showed that diversification is an important part of any investor and trader. While many assets declined sharply during the period, some classes like consumer staples did much better.

The same lesson can be seen during the dot com bubble when most tech stocks crashed.

In addition, most people who diversified their accounts by both trading and investing performed better during the crisis.

The fourth lesson is on who you listen to. There are many investment analysts today; the so-called sell-side analysts. Before the crisis, many were interviewed by financial media and supported the financial organizations.

Jim Cramer, a person who is highly respected promoted Lehman Brothers, a week before its collapse. Therefore, as a trader, We recommend that you only use your research before you buy and sell financial instruments.

Related » Herd Behavior of the Investors: How does it Increase Risk in Trading?

One of the most important lessons was on the correlation of the global market. While the crisis started in the United States, it quickly spread in other countries around the world. For example, UK banks like Royal Bank of Scotland (RBS), currently known as NatWest, went bankrupt.

The same thing happens today when activities in one continent lead to impacts in other places. In most cases, Asian and European indices usually crash if American ones close in the red. Therefore, as a trader, it is vital that you carefully consider events that are happening in other countries.

Another important lesson to learn from the Global Financial Crisis is that patience and perseverance are key. This is a lesson that can be learnt in all other crashes, including the Covid-19 and the Great Depression of the 1920s.

For example, long-term investors who used the stock market crash to buy the dip had substantial returns durin the bull market that emerged.

Related » How to Rebuild Your Portfolio After a Stock Market Crash

Trading is better than investing

In addition, the crisis was evidence that in most cases, trading is much better than investing. It was widely reported that many traders made a fortune during the financial market crash.

On the other hand, many long-term investors who had positions in companies like Bear Sterns and Lehman Brothers made substantial losses as the shares crashed.

Another lesson that many traders learned the hard way is on timing the market. This is a situation where traders and investors attempt to buy an asset whose price is falling or short one whose price is soaring.

For example, people who bought Lehman Brothers as the stock crashed made some substantial losses.

The financial crisis of 2008 was a blow to many and had repercussions for many years. However, it is also a very interesting case study that helps us understand what mistakes should definitely be avoided when day trading or investing.

This is only a selection; such an impactful event left many more lessons. Feel free to add more!