When is it Better to Stay Out of the Market?

Day Trade The World™ » Trading Blog » When is it Better to Stay Out of the Market?

One of the most common misconceptions about day trading is that one has to be actively engaged in the market.

In our experience, we have noted that come of the most successful traders are those who make the least trades per day. They become successful by having the knowledge on when to enter the market and when to stay in the sidelines.

In this article, We will highlight the times that you should take the latter strategy and stay in the sideline.

As a trader, you will go through various psychologically phases. When you have made a big gain, you will be very excited.

On the other hand, when you have lost a huge chunk of your portfolio, your psychological status will be really bad.

When you are very excited and when you are in a mess, we recommend that you stay away from the market until when you are calm and collected.

The ideal situation is to stay calm, do your analysis and then enter the market when you find appropriate.

The beauty of day trading is that people make money regardless of the direction of the charts.

Most people (including our partners) love volatility. However, there are times when the amount of uncertainty in the market is usually very high.

A good example happened in 2018. The Greece crisis which has been dominating the global news, led to accelerated uncertainty in the financial markets. When the Asian markets opened on Monday, all the instruments of the market took a downward trend. Those who had sold the instruments made a lot of money while their counterparts took a beating.

Even greater the initial impact of Covid-19 on the markets, with the Vix literally projected to the moon.

But there are those who have been able to take advantage of it. 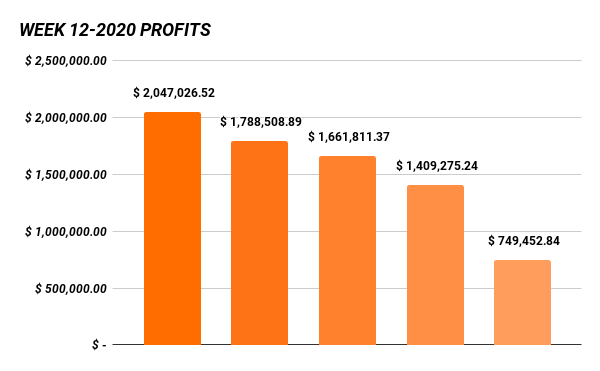 However, nobody was sure what would happen during those weeks, with the markets going crazy. To avoid being surprised by higher volatility, we advise you not to open too many trades.

Release of the data

As we have explained in other articles, the worst place to find yourself as a trader is when the data is being released.

The fact is that no one really knows the exact data that will be released. No one knows if it will beat the forecasts or not. When the data goes against your trade, the fact is that you will have significant losses.

Experienced traders know how to trade and allocate money on their trades during this time. But, if you are inexperienced, chances are that you will lose a lot of money if you trade before the data is released.

You can however learn how to trade during this time by learning the concepts of options, buy and sell limits, and buy and sell stops.

When the analysis is not adding up

As we have explained before, fundamental and technical analysis are usually very important for a day trader. All traders in the world use these tools to enter and leave the market.

However, there are times when the analysis on a personal level fails.

For instance, there are times when a major data will be released in favour of the dollar but the pairs fail to move in the expected direction.

To be clear: when the US employment data beats the market, the expectation is that the EUR/USD pair will go down as the dollar strengthens. In some trading sessions, the opposite will happen.

If you only enter a buy trade when the asset is oversold using both the RSI and Stochastics, and when the price is below its moving average, then you should always stay out of the market if these conditions are not met.

This is important because many people are constantly under pressure to initiate trades that are not justified by their thesis.

During those days, we recommend that you stay away from the market. During this time spend some time analysing all the data that you have.

This will help you find the reasons why the market is behaving like that.

As a trader, you should avoid trading during Friday afternoon sessions. This is because most of the trading movements in the market is caused by the big banks and hedge funds.

These institutions take precautionary measures to avoid being caught up in the weekends with open trades. As a result, they close most of their positions during these times.

Also, most of the most important data is released on Fridays making the afternoon sessions very volatile.

› 6 Economic Indicators that matter to traders

Therefore, We have observed that taking the sidelines during these sessions can really help you avoid the volatility and the weekend trap.

For instance, there are days when you wake up and feel less motivated to trade. During such days, You have to do you best to stay away from the market. It is during such days that You can made big losses.

As a trader, the more time you spend in the market, the more risk you expose yourself to.

Therefore, we recommend that you put a strategy whereby you know when to enter the market, when to exit and when to stay comfortably in the sidelines.

By doing this, your exposure to risk will be limited. You will also boost your psychological wellbeing by having this plan in place.

› Other Mistakes to Avoid as a Trader