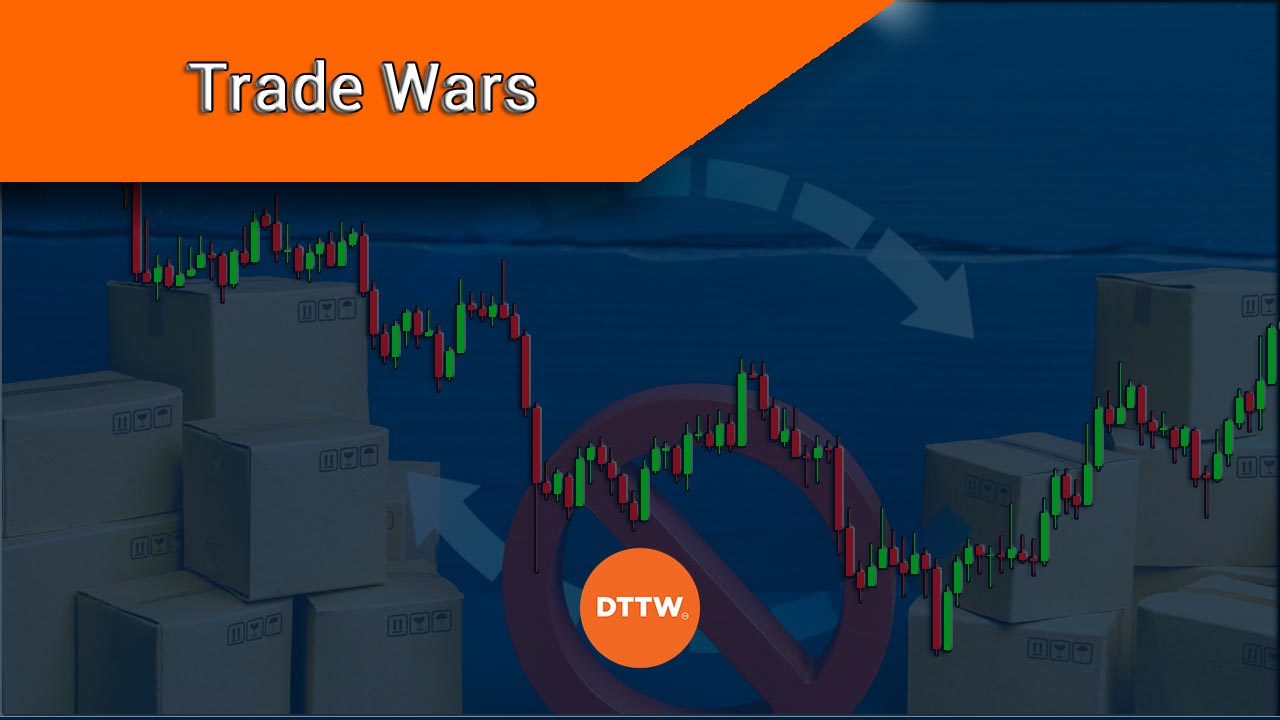 Geopolitical tensions have been rising globally in the past few years. The best-known tensions are between countries like the United States and China.

These tensions have led to what are known as trade wars. In this example, we will look at what a trade war is, how they happen, and how to trade them.

What is a trade war?

A trade war refers to a situation where two countries impose trade restrictions in order to “solve” some key issues. A trade war often involves tariff and non-tariff barriers to business. The countries hope that having these barriers will improve their domestic economies.

There are some key reasons why trade wars happen.

Trade wars are very common. Indeed, while only a few of them move to major headlines, these wars are happening all the time.

The most famous trade war happened during the Trump administration. For years, Trump had looked at American trade with rivals and allies using the lens of trade deficits. Over the years, the country’s trade deficit has been in an upward trend.

Therefore, when he became president, he started to help “solve” the situation. He did that by announcing large tariffs against countries like China, Canada, and even the European Union. His initial tariffs were designed to counter industries like steel and aluminium.

In the end, he implemented trade tariffs worth billions of dollars. These tariffs led to some negotiations with China, which led to a major deal that came into effect in 2020. Still, the trade deficit between China and the US has continued to widen.

There have been other trade wars.

Another popular trade war was known as The Chicken War. It took place in 1962 between the United States and Europe. This deal happened after the US increased poultry production, which then undercut local competition in Europe. As a result, the European Economic Community announced that it will add a 13% tax on American chicken. The US then responded with tariffs on European automakers like Volkswagen and BMW.

Another trade war is known as The Pasta war that was started by Ronald Reagan. During his administration, the president raised a tariff on pasta from Europe. Europe then retaliated by adding tariffs on American lemons and walnuts. The dispute ended in 1987.

How trade wars are fought

Trade wars don’t involve fighter jets and ammunition. In addition, people don’t die directly from the war. Still, this does not make trade wars less dangerous. These wars are fought in several ways.

First, a trade war is fought using tariffs. A tariff is a tax that a country charges another country for bringing in goods to its borders. For example, a country can add a 10% tax on a specific product. This tax is meant to reduce the quantity of the imported product by the country.

While tariffs can work, they have some challenges. First, adding a tariff on a dominant player like China can lead to additional costs to customers. This is because China is the biggest exporter in the world. At times, it is the only source of most products.

Second, many countries have devised ways of beating tariffs. For example, China used third-party countries to beat American tariffs. They did this by shipping their products through other non-tariffed countries.

Rising tariffs may be one of the reasons for the inversion of the Yield curve, one of the signs of whether a recession is approaching.

Second, trade wars can be fought by targeting specific companies. In the case of the US and China trade war, US used its might to put limitations on key companies like Huawei and ZTE.

Third, trade wars are also fought using non-tariff barriers. This happens when a country implements rules that make it difficult for another country to do business. For example, a country could place more checks for goods from another country.

In addition, a country could decide to ban products from other countries. For example, China has banned some American products like the New York Times and CNN.

In most cases, trade wars have an impact on stocks and other assets. Let us look at the US and China trade war for example. This trade war had a major impact in that volatility increased whenever Trump sent a tweet on the war. When volatility rises, traders tend to rush to the so-called safe products like the US dollar.

At the same time, the trade war led to the underperformance of most stocks. This is simply because it meant higher costs since most of them buy stuff from China. Some of the prices that increased were cars and electronics. Stocks that suffered the tariffs were retailers like Walmart and Target.

The trade war also affected companies directly. For example, many American companies that sell products to China became a target.

History shows that the long-term impacts of trade wars have become net negative for companies that implement them. For example, the Chicken War led to many European automakers moving some of their plants to the US. As such, Europe lost by losing some of those exports.