Trading Under The FED Decisions. Impacts for Day Traders? 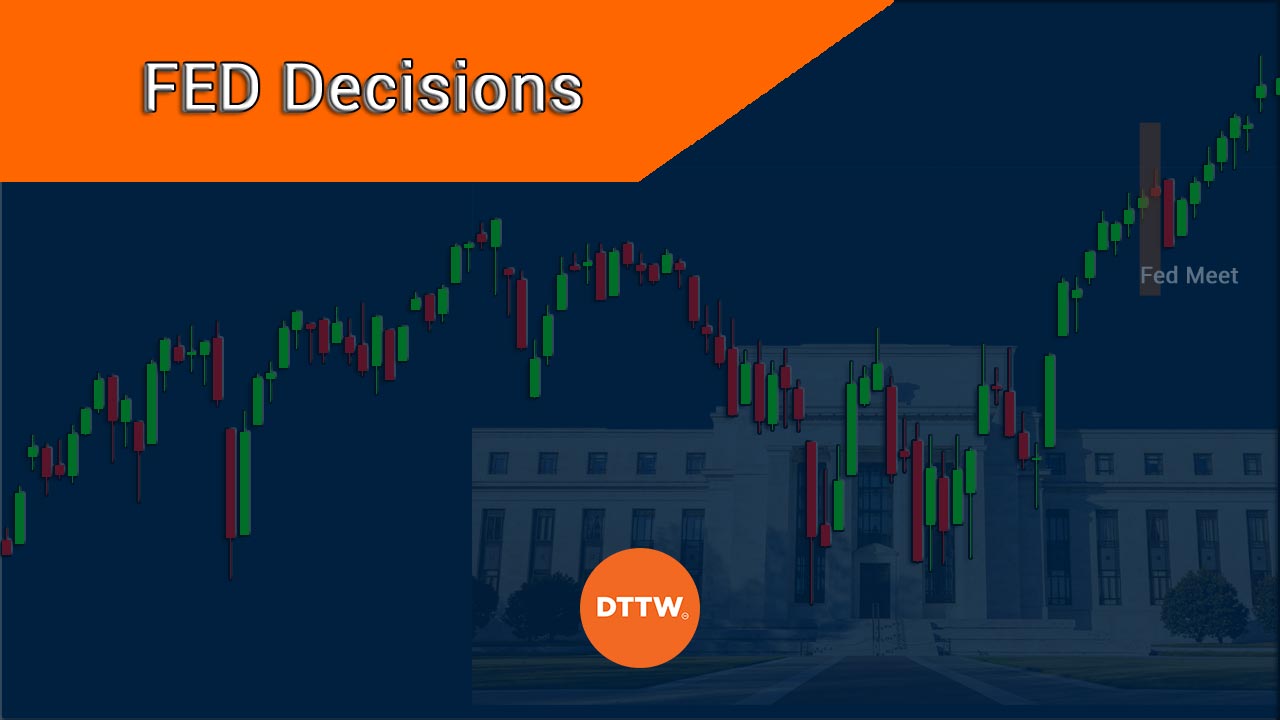 The Federal Reserve (Fed) is the most influential central bank in the world. As such, many investors tend to pay a close attention to its decisions and statements from its policymakers. Although the greatest interest is for longer time horizons, even day traders can take advantage of these decisions.

In this article, we will look at how the Fed works and how to trade it well.

How the Federal Reserve works

» Related: What to know about jobs numbers

The Fed has several tools at its disposal. For example, it is the only institution that is mandated to print money and set interest rates.

What is the FOMC?

The Federal Open Market Committee (FOMC) is a small team that is headed by the Fed chair. Its other members are the 7 governors of the central bank and a rotating team of heads of the regional banks.

The FOMC is a committee that meets eight times per year to assess the performance of the economy and then set the necessary monetary policy.

To set the monetary policy, the bank looks at the economy and acts. When the economy is doing badly as it did during the Covid-19 pandemic, the bank slashed interest rates and initiated a giant $120 billion per month quantitative easing program. When things start to improve, the bank is usually inclined to start tightening its policies.

Quantitative easing is a program where the Fed prints money and then buys assets like government bonds and mortgage backed securities. Its goal is to increase the amount of money in circulation. These purchases have helped push the Fed’s balance sheet to more than $8 trillion.

The period before and after the FOMC meetings are usually watched closely by investors. They also tend to be highly volatile. However, in the recent past, because of forward guidance, the amount of volatility has waned a little.

Forward guidance is a policy framework that was adopted after the 2008 financial crisis. In it, the Fed tends to provide guidance about what it will do in the future.

Key data that the FOMC watches

When making its decision, the FOMC looks at several economic numbers to determine what to do. The most important ones are inflation and employment. In the past few years, the Fed has put a target of inflation to be about 2%.

The key inflation numbers it watches are:

It also watches to ensure that the economy is in full employment. Full employment refers to a period when the country’s unemployment rate is below 5%. In this, it pays a close attention to the monthly non-farm payrolls data.

In addition to these, the bank watches other key data like house price index (HPI), consumer confidence, retail sales and manufacturing activity to make a judgement.

In the past, Federal Reserve decisions used to have major implications for the financial market. This is mostly because the bank did not have a forward guidance framework. These days, these movements tend to be relatively muted. For example, in the chart below, we see that the Fed decision did not have a major impact on the Dow Jones index.

The Fed decision and the subsequent release of FOMC minutes tend to only have impacts when the bank’s decision differs from what analysts were expecting.

Still, as a trader, it is always important for you to be prepared about rate decisions since major movements across asset classes could have impacts.

The key assets to watch before and after the decision are indices like the Dow Jones, S&P 500, and Nasdaq 100. Also, you should watch out for individual stocks and indices.

» Related: How to trade indices

In theory, a hawkish Fed decision tends to be bad for the stock market. This is because it means that many companies in the stock market will start paying higher rates for what they owe. This is important now that companies have trillions of dollars in debt.

Fed interest rates means that the bank has embraced an expansionary monetary policy. As such, it means that people and companies will generate little gains from bonds and bank accounts. Therefore, they tend to move into relatively riskier assets like stocks and cryptocurrencies.

For example, while the US economy went through a major recession in 2020, stocks and cryptocurrencies surged because of the relatively low interest rates.

Still, stocks are not created the same. In most cases, when rates decline, banking and other financial stocks tend to disappoint. In the US, the worst-affected are usually regional banks that don’t have a lot of investment and wealth management tools.

Banks disappoint because low interest rates mean that their margins will be under pressure as well.

What rate hikes mean for traders

Interest rate hikes, on the other hand, tend to make other assets like bonds more effective. They tend to have negative implications for stocks. The most affected stocks are growth stocks, which are usually relatively riskier than value stocks.

Summary: what the FED decisions tell us

Fed decisions happen eight times per year in normal periods. However, at times when there is a crisis, the bank tends to meet more times.

Therefore, in this article, we have looked at the Fed’s mandate and how you can trade when the decisions happen.

I got a link from this platform sent to my inbox by a friend and since then, I've been a voracious reader of virtually most tips herein. Great job! Thanks a ton