Why the Economic Data Matters to Traders (and Which Ones) 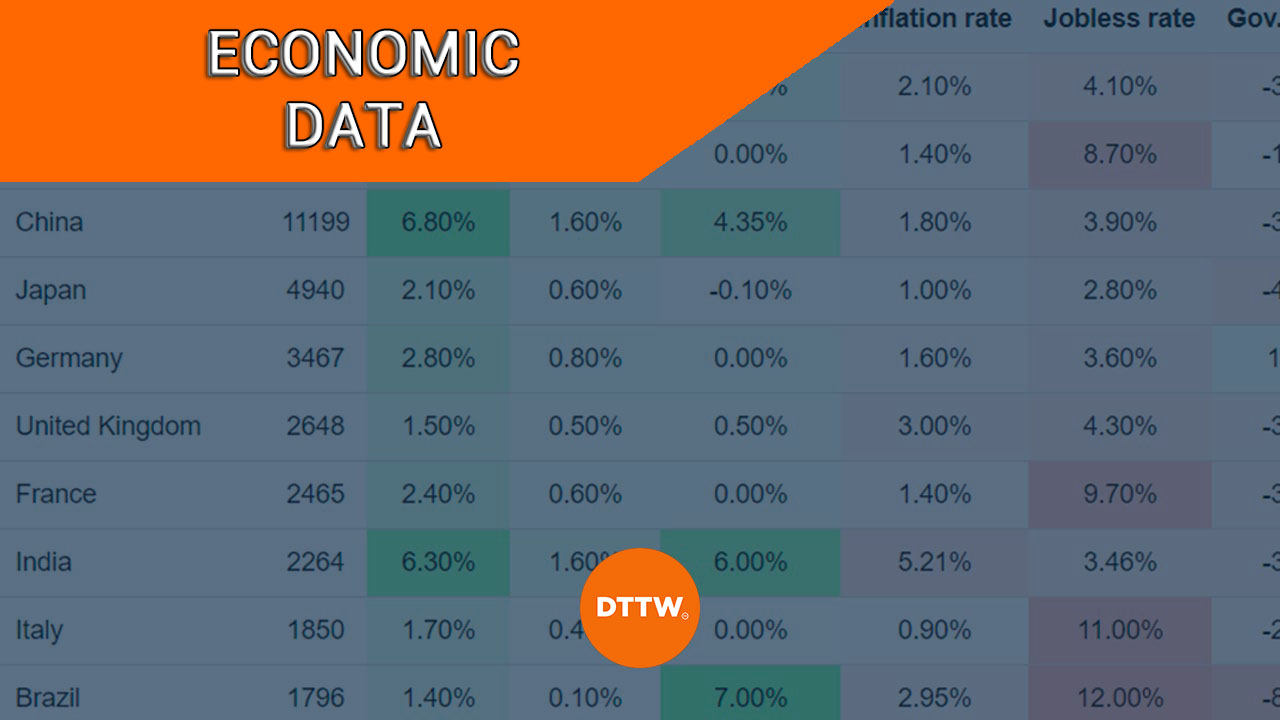 Data, data and more data. A trader spends a lot of his time doing research

For a trader there are many important economic trading data to monitor before starting a trade (we also recommend you to check this checklist). Every day, we receive a myriad of data ranging from jobs numbers to economic growth numbers to inflation.

Often, most people ask why all this data matters. In this article, We will highlight the different types of data and why traders should pay close attention to them.

» Related: 4 Things to Consider when selecting Financial Asset to Trade

Why all this data matters?

We want to start with a theoretic question. Assume you won a lottery of $1 million. To receive the money, the sponsors of the lottery ask you to invest in either United States or Zimbabwe.

To give a context, United States is the most developed country on earth while Zimbabwe is among the poorest. In the latter, most people don’t have jobs and the situation seems dim by the day.

As a person with common sense, which country would you invest in? Zimbabwe or United States? We assume, you would invest in the United States.

Now, assume the two countries were the United States and Norway. These are two rich countries. In this situation, you will be torn to select because of their growth and prosperity.

To make a decision, you will look at the rate of growth and the direction of the country.

Traders ask these questions on a daily basis. They want to know the best countries to allocate their hard-earned money. To decide on the countries, stocks, and currencies to invest in, they weigh all these facts.

How to find these Economic numbers

The easiest way of finding these numbers is to use the economic calendar. This is a free tool provided by most platforms like Investing.com and Dailyfx that show you when economic data and numbers will come out.

As a day trader, you should ensure that you look at the calendar on a daily basis. Other calendars that will help you are the earnings calendar, dividend calendar, and splits calendar among others.

How to read the economic calendar

The economic calendar is an easy-to-use tool that anyone can use to find data. It has several important sections that you need to look for. First, ensure that you are looking at the period. You can select the exact day or a certain range.

Next, as shown below, the calendar has several sections like time, economic event, actual, forecast, and previous. As the name suggests, the previous figure is what was reported in the prior month or quarter. Forecast is what economists are expecting while the actual figure is what the agency published.

A red actual number means that the reported figure missed expectations while a green one implies that it was better than estimated. For example, in the figure below, we see that Japan’s exports came in at 25.3%, which was lower than the expected 28.1%.

It is worth noting that not al figures in the economic calendar have an impact on currency pairs or stocks. The most important numbers are those that have three stars.

Also, you should always have more information about market conditions. For example, the US may publish strong jobs numbers and then the US dollar fails to react. This happens when the market expects the data to not have important impact on Fed’s decision.

The jobs number is one of the most important, as we mentioned above. Every month, agencies in the developed countries compile the number of people who get and lose jobs. They also compile the rate of wage growth.

By compiling this data, they are able to present a picture to investors whether the economy is doing good or not. An economy that is adding jobs is ideal to most investors because it creates more people with higher purchasing power.

The US usually publishes its employment numbers every first Friday of the month. These numbers show the total number of jobs created, the unemployment rate, the participation rate, wages, and the number of hours workers.

Employment numbers are also important because they form the mandate of the Federal Reserve. The Fed is given the task of maintaining low unemployment rate and stable inflation. Therefore, bad jobs numbers tend to signal that the Fed will maintain a dovish stance.

An inflation is a period of increased consumer prices. To control or trim inflation growth, central bankers hike interest rates. Therefore, when the inflation data comes out, investors are able to figure out the direction of the central bank on monetary policy.

Certain investors love higher interest rates. For example, if you are bullish on the dollar, chances are that you will love getting a yield from the dollar. Therefore, you should pay attention to the actions of the central banks about their interest rates decisions.

Another important economic data to watch when trading is on the housing market. These numbers are important because housing is part of investments and consumer spending, which are two of the biggest constituents of the GDP calculation.

Building permits show whether there is an appetite for investments in an economy. Still, housing starts are viewed as more accurate indicators because they show housing projects that have already started. Home sales numbers show the appetite of houses in the economy.

Therefore, more retail sales are usually signs that the economy is doing relatively well. The US usually releases retail sales every month.

There are other important events that you should be aware about. Some of the most important ones are:

There are other important numbers that have an impact on the stocks and currencies. Some of those we have ot mentioned are home price index (HPI), industrial production, COT reports, and construction numbers.