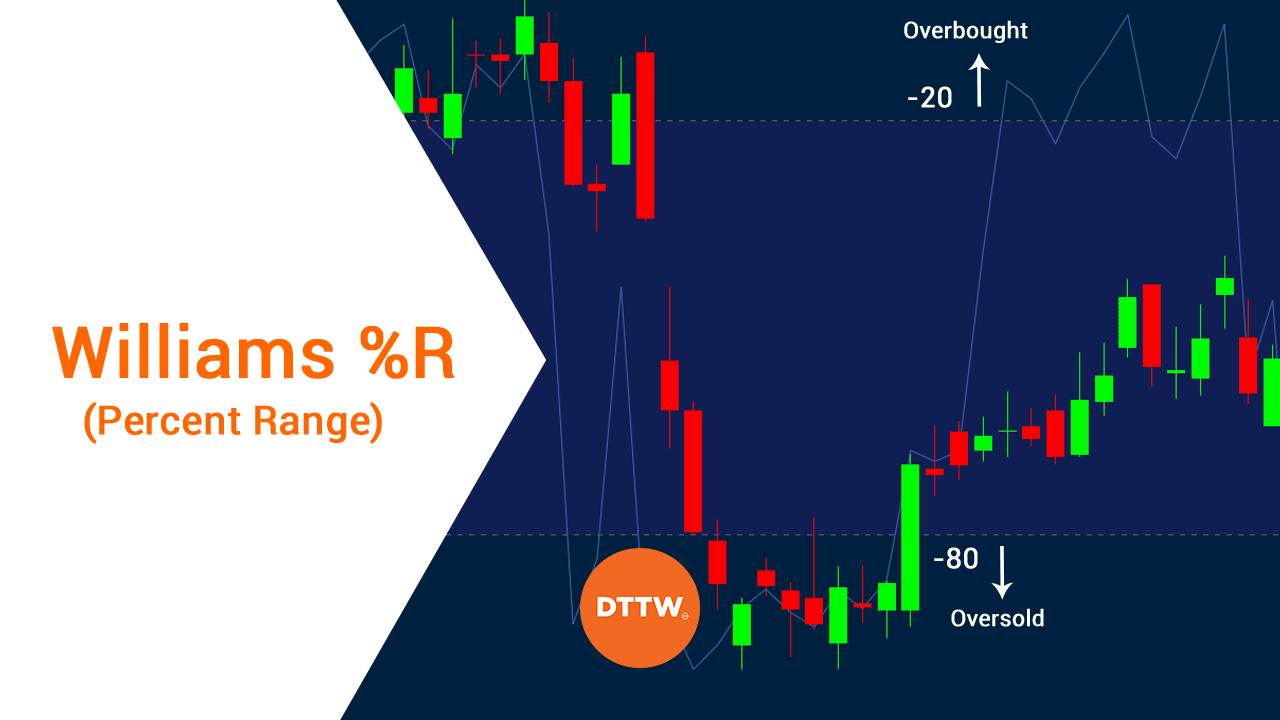 Technical indicators are excellent tools used to predict the direction of a financial asset. Interestingly, most indicators are derived from other indicators. For example, the Bollinger Bands was developed by using the concepts of moving averages and standard deviation.

Similarly, the envelopes was created by tweaking the moving averages.

In this report, we will look at the Williams %R (Williams Percent Range), which was developed by using the same concepts as the Stochstic Oscillator.

What is the Williams %R?

The Williams %R (or %R) is an indicator that was developed by Larry Williams, a well-known market technician. The indicator is used to identify the relationship between the last closing price of a financial asset with the highest and lowest prices of the asset.

What does it tell you?

The Williams %R typically shows the levels of the relative close of a financial asset compared to the highest level of the period under consideration. Like many other oscillators, this tool can help you identify when a currency is Overbought or Oversold (between -20 and zero the former, between -80 and -100 the latter).

The difference between %R and Stochastic is that the latter looks at the relationship between the close and the lowest price. In its calculation, the indicator corrects for the Stochastic’s weakness by multiplying the figure by -100.

Therefore, when applied in a chart, the fast oscillator and the Williams %R indicator, they always show the same thing.

As mentioned, the indicator is eerily similar to the Stochastic oscillator. The process of calculating it is relatively simple and the formula is:

In other words, you first identify the lookback period. Then, you take the highest high and the lowest low.

Here is an example of the Williams %R. Assume that the stock of a company closed at 90.

In this period, it reached a highest level of 100 and the lowest level of 80. Therefore, the indicator will be:

As always, as a trader, you don’t need to know how it is calculated. All you need to know is how to implement it on the trading platform.

Also, while the default period is usually 14, you can tweak it and use your preferred one.

Best settings of the Williams %R

The next thing you can change is the color of the indicator. You could change the line color and the overbought and oversold levels.

As mentioned above, the Williams %R indicator moves between 0 and minus 100. In this, -50 is an important number because it is the mid-point.

Therefore, if the line crosses minus 50, it means that prices are trading in the upper section of their high-low range and vice versa.

As we have written before, overbought and oversold levels are not necessarily signs to sell and buy respectively. Always remember that an asset can remain in an overbought or oversold position for days or even months.

A good example of this is shown in the chart below.

Example of the Williams R indicator

We have looked at how to calculate and how to interpret the Williams %R indicator. Now, let us look at a real example of it in use.

As seen above, the price can remain in an overbought and oversold level for days or months. Therefore, the indicator does not tell you where to buy or sell. Instead, it gives you a feel of the market.

Combining Williams %R with other indicators

No indicator is best used alone. Therefore, it is always important for you to combine it with other indicators. Some of the most common indicators you can use are trend ones like the moving average and Bollinger Bands. You can use it to confirm an existing trade or a reversal.

A good way to use it to combine the percent range with other indicators like the moving average and the RSI. Also, you should use other tools like the hanging man, triangle, and Doji patterns.

Advantages of using the Williams %R

There are several benefits of using the Williams %R indicator.

The main disadvantage of the Williams %R indicator is that it does not tell you where to buy or sell.

Also, the indicator can remain in the oversold and overbought levels for long.

› Related:  When to enter and exit a trade?

The Williams %R indicator is a simple-to use indicator. As a trader, we recommend spending a considerable amount of time experimenting with it in a demo account.

This means tweaking the period and identifying optimal settings.